In 1993, St John's celebrated the 150th anniversary of the founding of our church.  Many events and sales of memorabilia took place at that time, but the most significant spin-off of this momentous event was the idea of reaching out to the community in a real practical way.  The Pastoral Care Team, aware of the increasing effects of unemployment and economic depression following the closure of Ravenscraig, embarked on a project of opening a Church Community Shop, aimed at meeting a demand for good quality articles and clothing at affordable prices.

With the help of a £1000 loan from the Kirk Session, and a band of joiners and painters from the congregation, the Church Community Shop opened its doors in Hamilton Street on 27 February 1993.  After a hectic six weeks, staffed by ladies from St John's, it became clear that more help was needed to support the project.  The other churches in the town were drawn into the project, which as we know has developed over the years beyond all expectation. 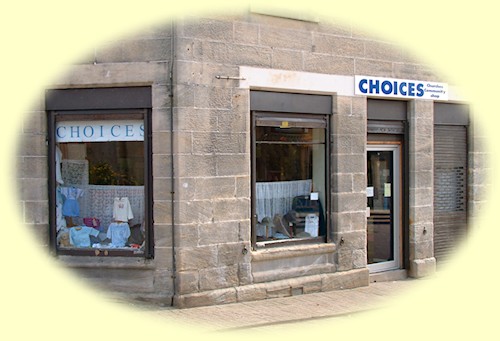 From those small beginnings 21 years ago, CHOICES (Churches Helping Others In Christian Evangelistic Service) has provided a much needed resource within the town, making financial profits which have been disbursed locally and nationally as the need arises, not least, Street Level whose existence today, relies heavily on the financial support it receives from CHOICES.

After deduction of rent, rates, utilities and other running costs a staggering £427,015 has been raised from sales, donations and bank interest, and returned to the local community and to national disaster appeals in the 21 years to 2014.